Ducky – like Callie and Shadow before her – is curious about almost everything in the backyard. But sometimes her curiosity turns her into her own worst enemy….

See the hole on the right side of the photo, where the dead leaf is? Well, that’s the entrance to a beehive. I’m not sure how many bees are living in there, but I’ve always only seen one hovering around the hole.

A few days ago, Ducky’s curiosity got the better of her and she started digging and sniffing at the hole. And a bee came out to chase her away. And harass the living you-know-what out of her. I don’t know for sure if it stung her – I couldn’t feel or see any welts – but I brought her inside and gave her a Benadryl just in case. She settled down for a nap and I sat down to read for a while.

Then, when we came outside on both Thursday and yesterday, her curiosity got to her again. And her nemesis came after her, again. She just does. not. learn. 🙄

So far this morning her curiosity has been overruled by her prey drive. She’s only been interested in chasing the resident squirrels and chipmunk around the yard. And trying to find the chipmunk’s nest under the leaves against the back wall of the house. She hasn’t found one yet, but she’s been sniffing like crazy. 😂 At least the chipmunks won’t sting her. Or harass her.

Right now Miss Ducky is interested in one thing: chillin out in the fresh air and sunshine. 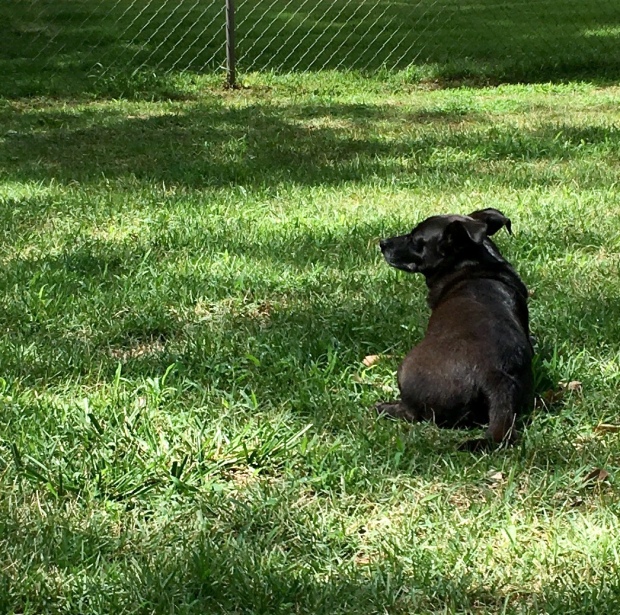